You love stories, you love ideas, you love conversations and maybe you also like a drink or two? Docupodium in the Amsterdam based space Cinetol, has all of the ingredients above, and I’m going to tell you a little more about it.

Even though Amsterdam is known to be a creative city, ‘de Tolstraat area’ might not come to mind when you are planning your route for an inspiring night out. Luckily, that is changing rapidly with Cinetol. Cinetol is a creative hub run by Quico Touw; a tall, bearded Dutch guy who somehow got a talent to always stay calm when things need to be done.

Cinetol consists off it’s new cafe De Tolbar; (think large tables, great food and wifi), work spaces that you can rent, and also a theater that is used for performances and debate nights. One of the events that Cinetol accommodates is Docupodium; one of my favorite projects at the moment. 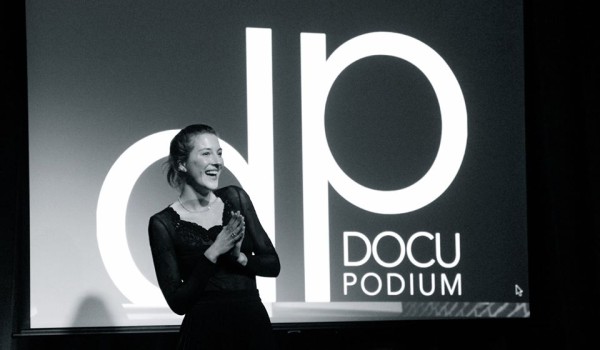 Docupodium is created by Anna Chvartchenko and Lysander Wiering. As film makers themselves, they sensed there was a need for young people to show their work without the complicated process of  applications, competition and revenue. Simply said: Docupodium is a platform for young documentary makers in which they get to show their debute films to an audience explaining their work and it’s process. Entrance is free.

As the current host and moderator of the event, I continuously get inspired by promising and talented young folks who cover a broad range of topics. One of the films that touched me recently was ‘ Last Hour in the Sun’ by Suzanne Janssen who tells about a generation of pilots who, due to budget cuts and being misinformed, could not follow their once imaginable dream. Showing us that even after spending a fortune on education, companies could still let you down. The award winning film ‘If Mama ain’t Happy, Nobody’s Happy, by Mea de Jong,  about mothers and daughters was  also shown at Docupodium; stories I wouldn’t have wanted to miss. Some of which may have been hard to find elsewhere.

So then, every last Thursday of each month we try digging into invited promising film makers’ brains while getting grasps of the social context in which their films endure, so that as the night ends, we go home with fresh insights, inspirations and good conversations that stick.

If you are in Amsterdam looking for something relaxing and mind opening, or whether you are professionally interested in creativity and film; I hope to see you, and please help out your moderator by asking some questions!