Trafo Pop: So Much Fun with Technology!

They form an extraordinary sight. Trafo Pop is a Berlin bicycle club of night riders that swarm the streets of Berlin like neon-bees on wheels. Their distinctive asset: bright, wearable electronics plastered onto denim jackets. Their philosophy: sharing is caring. 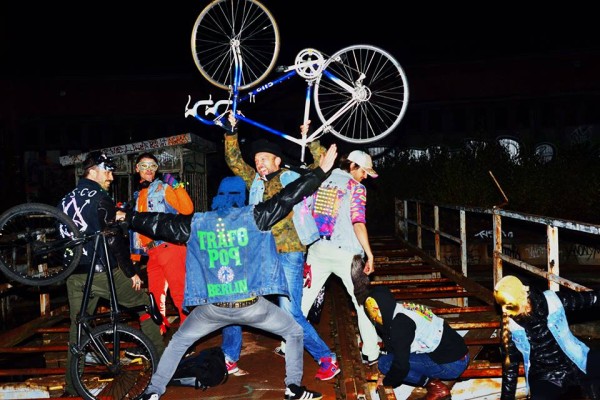 Preparing for one of their night rides, the members of Trafo Pop appear to be immersed in the moment. A group of about twenty people has gathered at Güterbahnhof, an abandoned locomotive station in Pankow, North Berlin. The ghosts of the past must be entertained by the colorful bunch of bikers that now use this hollow space as their meeting point. The men and women are wearing multicolored jackets that light up in the dark of the night. A woman in her early thirties is rocking bunny ears, a muscular man’s face is hidden beneath a silver mask. In the center of it all stands a large, golden flag. The flag’s flapping sound is the only noise in the otherwise silent ruin. A blond guy with a wolf jacket makes a signal and the members of the group circle up, bikes close to their bodies. They are getting fired up and begin cheering in German. One final, collective yell. They’re ready to hit the streets of Berlin. 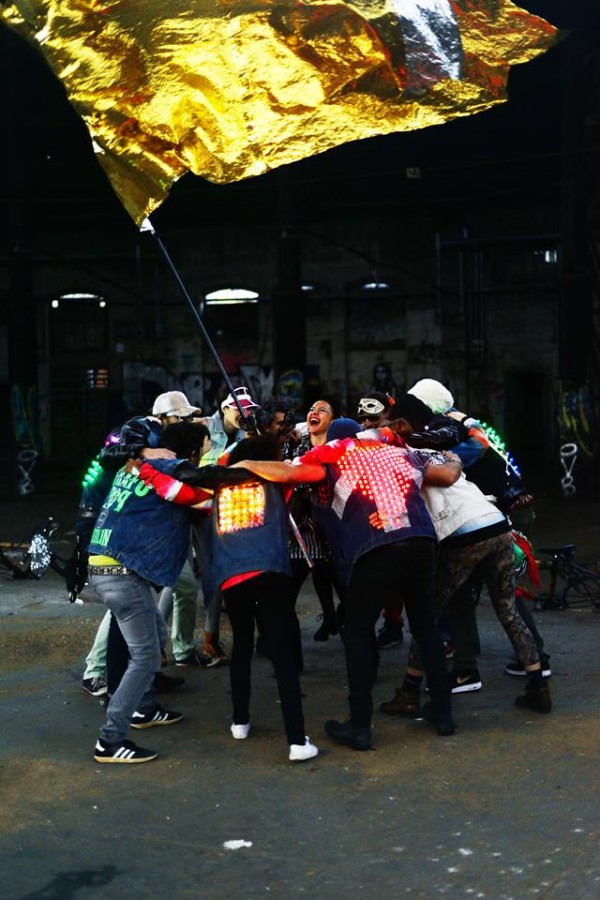 It was in the summer of 2013 that Thomas Gnahm (34) finished his first wearable electronic clothing item. A denim jacket made from a hundred LED lights of different colors, complete with a wolf appliqué. He was excited because finally, it worked! The sun was setting in the city and Thomas put on his golden tights, neon clothes and sunglasses. Nothing was in the way anymore for his maiden ride. ‘I was very scared, kind of like going on a first date. I had no idea if I was crazy or not and was definitely struck by Lampen Fever. I think the English word must be stage fright. All I could do was keep cycling and cycling. I figured that if I didn’t stop, nothing could happen to me.’ After some hours though, Thomas needed to take a break and hesitantly walked into a bar. He awaited a loud applause and a vodka shot. ‘People loved it!’

Encouraged by the positive outcome of his gut feeling, Thomas decided to start a movement and bring together a group of night riders with a passion for ‘wearables’ and open source technology. I took a train to Berlin to learn more about the Trafo Pop community and the philosophy and aspirations of its founder Thomas: a boyish man and one of the most enthusiastic people you could come across.

What inspired you to start cycling with LED lights and neon clothes?

‘I was inspired by the critical mass movement. A worldwide movement, known as an “organized coincidence” in which you try to gather as many cyclists as possible to take over the streets. The motives can be political, or simply to make a statement. I have always been fascinated by the many bicycle groups in the world. They all have different identities. Some are leaning a bit more towards the rough side, others are more relaxed. I really share and understand their common goal of using the streets as a playground. I figured that if I could combine this idea with the open source ideology and wearable electronics, and most of all, a lot of fun, it could really become something special.’

How did you come up with the name Trafo Pop?

‘Trafo is short for the German word Transformator. We are all about transformation. We transform electricity into light. But we also transform our muscle energy into movement. We transform free time into something that’s worth it for us. Last but not least, we transform our ideas into something expressive that people can see. The ‘Pop’ part stands for popular and stresses our vision that this is for everybody. Open source, no secrets.’

Could you explain a bit more about the open source movement?

‘The open source movement stands against a closed minded mentality. We believe that knowledge should be available for everyone. We are massive supporters of this idea, and believe it’s important for the future. The computer industry for example, started all closed. As a result, the general public had no idea how computers worked. It’s important that people start owning their usage of technology. Your phone for example, you could just use it in the way that the brand wants you to use it. But we want to inspire people to unravel their devices and then…’-Thomas smiles-‘have some fun with it!’ 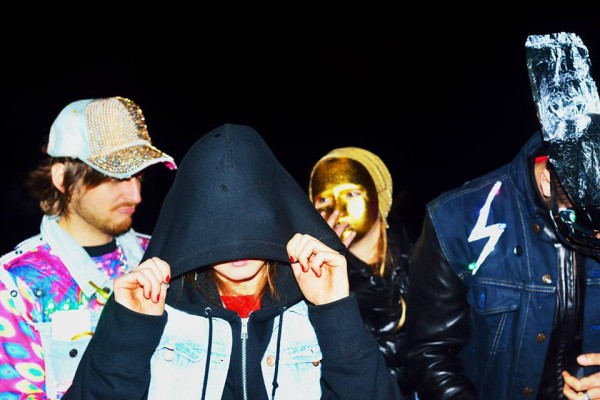 Now that we’re talking open source, tell us how the jackets work!

‘So it goes like this. People come to our workshop with their jacket. We go and sit down together to talk about how they would like it to be customized. This takes about ten minutes. Then we make a design; let’s say they want a space ship. We cut out foils that can be ironed onto the jacket. Then we think about how to position LED lights. If it’s a complex design, we have a laser cutter, but we can also do it by hand. We position the LED lights into the jacket. Done!’

But then the jacket needs to be lit up, right?

‘Yes. We connect the LED lights to a little board with a micro controller on it. This board is linked to open source software. Pins are connected to the LEDs with just three cables. And then follows the most important part; you will have to use a Kinder Surprise Egg to protect your board. Ha! So first you have to eat your egg and then use it as a protection case for your own little mother board, before you put it in your pocket.’

‘Oh yes! We do up cycling of all kinds of trash. I really love the idea of using things that people consider to be worthless for high tech. Anyways, on the second day of the workshop, we take a picture of the jacket and upload that to the computer to digitally redraw all the LED strings. On a computer it’s possible to program LED lights for different behaviors. It’s pretty easy once the computer program has been familiarized and there are many possibilities. You can onnect the motherboards to your twitter feed for example and make them interactive.’

So you are basically unraveling technology that already exists? You don’t come up with new applications?

‘Well, so many people are not aware of everything that’s already here.’ Thomas points at an i-Phone on the table. ‘This thing over here, is so incredibly powerful, the processing power of an i- Phone is about twenty times as powerful as the first rocket that went to the moon. You can go to the moon with your i-Phone. Do you realize that? We want to show people what’s already here. And it’s amazing.

I think many people are afraid of technology because it’s still this magical thing. A huge perk with the LED jackets is, that the technology appears visible. And yes, it’s freaking cool and aesthetic, but the fact that me and you, and all other people, can see and feel what’s possible to create, helps to make sense of it all and eliminates the mysteries and frightening notions surrounding technology.

Also, as a member of Trafo Pop, you are working towards a real life goal. The end result is a jacket that is personal, wearable and which obviously, has to work. As soon as it does, people can’t wait to use it. During the creation process we envision a real life activity. Namely: to get out there and take our art to the streets. So for us, technology is just a vehicle to achieve that real life feeling.’ 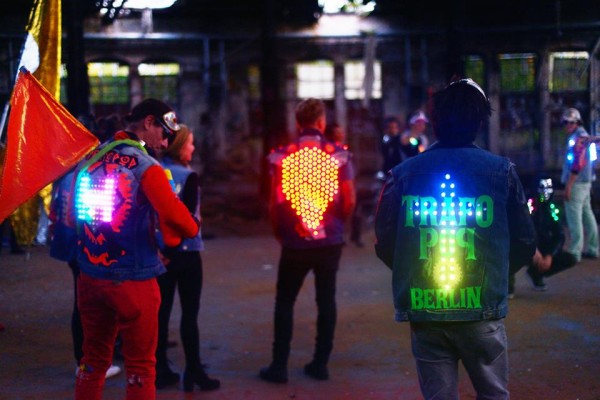 What is that feeling exactly?

‘You feel very powerful when you go on a night ride with a big group. It’s like being a massive billboard. People go out of your way when you are a big visible group like that. Also, once you dress up, you become someone else and you feel different. That’s very liberating.’

What is it about Berlin that it has so many interesting subcultures, you think?

‘There is a certain gravitation field around Berlin, that attracts people and ideas. You know, when I first came to Berlin I thought: ‘it’s not the most beautiful city at first sight.’ But soon I discovered that behind these grey walls, there is something colorful going on. I wanted to be part of that. Obviously, Trafo Pop is all about the colors. In Berlin it’s easy to come up with your own culture. The rent is cheap, there is lots of room and the city is full of free spirits. Three ingredients you won’t find as easily in a different city.’

Do you think wearable electronics will become regular items one day?

‘Well, people really love it. Who knows, maybe we will create a new demand and make it a norm. It could be possible that people won’t be satisfied with non-electronic clothes anymore, because they are too plain and expressionless. The possibilities with wearables are truly endless. You can make them light up according to your mood, or even flirt with other people through the lights on your jacket!’

What are your future aspirations with Trafo Pop?

‘We would love to make it a Fight Club concept, with chapters all over the world! We’re already in touch with some people in Toronto and we can’t wait to bring our vision to Amsterdam as well. Our website will become an open source platform with instructions on how to hand make your jacket so people all over the world can adopt a Trafo Pop lifestyle. In the near future there will become a clear schedule with night rides in different cities. So next time when I come to Amsterdam, all I have to do is bring my jacket and join in on a beautiful night ride along the canals. That would be so much fun.’